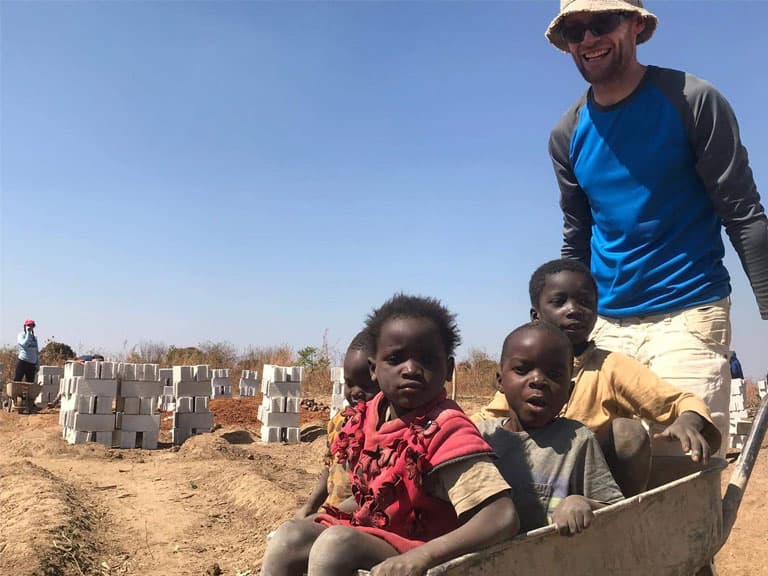 Our international placement model is an incredibly cost-effective way of making high level technical knowledge and skills available to grassroots organisations involved in tackling poverty. We believe that where strong, equitable partnerships exist, carefully selected young engineers, with the right attitude, support and preparation, are capable of building the capacity of grassroots organisations and catalysing development.

In 2016 the winners of WTINE travelled to Marsabit, Northern Kenya to work alongside the local Concern-Worldwide team and develop their Modified Airdop project. We are currently developing further placement opportunities with local partners in Kenya.

This year EWB Ireland have partnered with Habitat for Humanity Ireland to offer a two week home building volunteering opportunity to Irish students and professionals. There are a number of departure dates available across Summer 2019 on “open” or “closed” teams

EWB Ireland has close ties to Nepal and the Nepalese community in Ireland. We have established a volunteer programme in Nepal through local partner organisations with a focus on professional development of Nepalese engineers, post-earthquake reconstruction and recovery and community resilience. These placements are open to both professional engineers and undergraduates.

I have just returned from Zambia, where I spent two weeks working with a team of volunteers from Engineers Without Borders on a Habitat for Humanity Ireland housing project in the Central Province town of Kabwe.

Zambia is one of the poorest countries in the world, with close to 64% of the population living on less than $2 a day. The national housing deficit stands at 1.5 million units and is projected to double by 2030, according to UN HABITAT.

Located 100km north of the capital Lusaka, Kabwe was once a thriving town of 220,000 people. Almost a century of lead mining and smelting has, however, left a terrible legacy, and it is now the world’s most toxic town, according to pollution experts.

One of the most vulnerable regions in Kabwe is Makalulu, where access to schools and healthcare facilities is often limited, and many families live below the poverty line.

As one of group of 19 dedicated volunteers, my job was to assist in the build of two, three-room houses for two low-income families. Our team was supported throughout the build process by a local contractor who had, thankfully, completed the house foundations prior to our arrival.

Each house had a total area of 30m2 and was built with concrete blocks, timber roof trusses and aluminium roofing sheets. An outdoor latrine was built for each house because it was not possible to provide access to a sewerage system, water supply or electricity as part of the project.

All the work undertaken was manual, which made mixing the concrete and mortar for the blocks particularly challenging. It required a team of dedicated locals filling water barrels from the nearest well and rolling them, one at a time, to the construction site, before mixing the concrete by hand.

During our lunch breaks, we headed to a nearby Habitat home, where a team of locally employed women cooked a wide selection of meals for us on simple cooking stoves.

When the last day of the build came and the houses were ready for handover, the celebrations began. Speeches were made, songs were sung, and together with the two families and their new neighbours, we danced until late into the evening. It was a moment of pure joy that reminded me of the strength of the human spirit and the power of hope.

I would like to thank Engineers Without Borders Ireland, Habitat for Humanity Ireland and Roughan & O’Donovan for giving me the opportunity to participate in such a challenging and rewarding project.

About Habitat for Humanity in Zambia

Habitat for Humanity works in partnership with vulnerable, low-income families in the poorest parts of Zambia to improve their living conditions.

Due to the lack of affordable housing, about 70 percent of urban dwellers in the country live in unplanned settlements with inadequate access to safe and clean water, sanitation and extension facilities.

Nepal, for many, is a country steeped in mystery. A country nestled between two giants, China & India. Home to the world-renowned mountain range the Himalayas. If you were to look closer you would find a country that has an ancient culture deeply engrained into its people and landscape. Looking even closer you would find a country that is in great need of help. 86% of Nepal’s population lives rurally with 68% involved in subsistence farming. The rural communities and farmers in Nepal face harsh living conditions, limited resources and educational opportunities.

Four design engineers won the national competition termed, ‘Where there is no engineer’, (WTINE) designing for community resilience. The challenge was to find the best practical engineering and product development solutions to global issues. The winning project was a simple, efficient and affordable Biokiln. The Biokiln is a multi functional burner that burns organic waste material, providing a source of heat, application for cooking and most essentially it turns organic waste into a natural soil fertiliser called Biochar. When Biochar is mixed with water, compost and animal manure it acts like a sponge and absorbs these soil-rich nutrients. When added to soil the Biochar releases these nutrients to increase crop production by up to 120%. Overtime Biochar will continue to add to the biodiversity and overall health of the soil.

The four designers, supported by Engineers Without Boarders Ireland, (EWB) & Concern Worldwide, were sent to Nepal in April 2017 to pilot their Biokiln in the rural Nepali district of Sindhuli. Within four days of arriving in Sindhuli the team had sourced materials locally, produced two fully working Biokilns at a local workshop, and engaged the rural communities in two educational demonstrations in how to source, build and use the Biokiln and its Biochar for agricultural sustainability.

The team had to face many challenges when on the ground. Logistically Nepal is one of the most difficult countries in the world to travel through due to its poor road infrastructure. Due to the limited materials, in rural regions, the design engineers had to adapt their Biokiln to what materials were available. The local workshop facilities had but simple hand tools and few power tools for manufacture. Not to forget the language barrier.

The organisation and planning pre-pilot by respected partners, EWB & Concern and team played a crucial role in the whole success of the pilot. On the ground the partners had organised local support for the team in terms of vehicle support and local coordinators who assisted with sourcing and translation. The winning Biokiln design was chosen because it is a product that is made from standardised materials that can be sourced even in the most remote regions. A product can be easily manufactured with basic facilities and equipment. A product that is lightweight and compact making it easily transported.

The Biokiln can make a major difference to people’s lives all over the
World. The Biokiln helps to improve the living standards of those in developing communities who face a lack of food, limited resources and harsh living conditions.

The Biokiln needs to illicit the assistance of people and organisation’s with a variety of skills, experience and resources to help get the Biokiln to people who need it most.