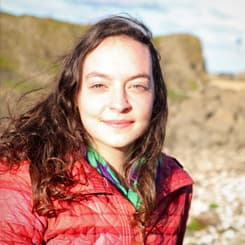 Meriel is a Civil/Structural Engineer at Hayes Higgins Partnership. She received her BSc in Civil Engineering from Cornell University, which is also where she first became involved in EWB. While on the EWB-Cornell team she helped design and build a pedestrian bridge in Calcha, Bolivia and subsequently became a founding member of Cornell’s Bridges to Prosperity team.